“The goal of this whole house makeover was to reconfigure the first floor to allow for kitchen-centered gatherings with family and friends. Pulling the first floor together so that it flowed better required flip flopping the dining room and living room, moving and enlarging the kitchen and expanding the sunroom opening. Space was snagged from the garage to create a mudroom space, to keep coats, boots and accessories organized, with an accompanying powder room." 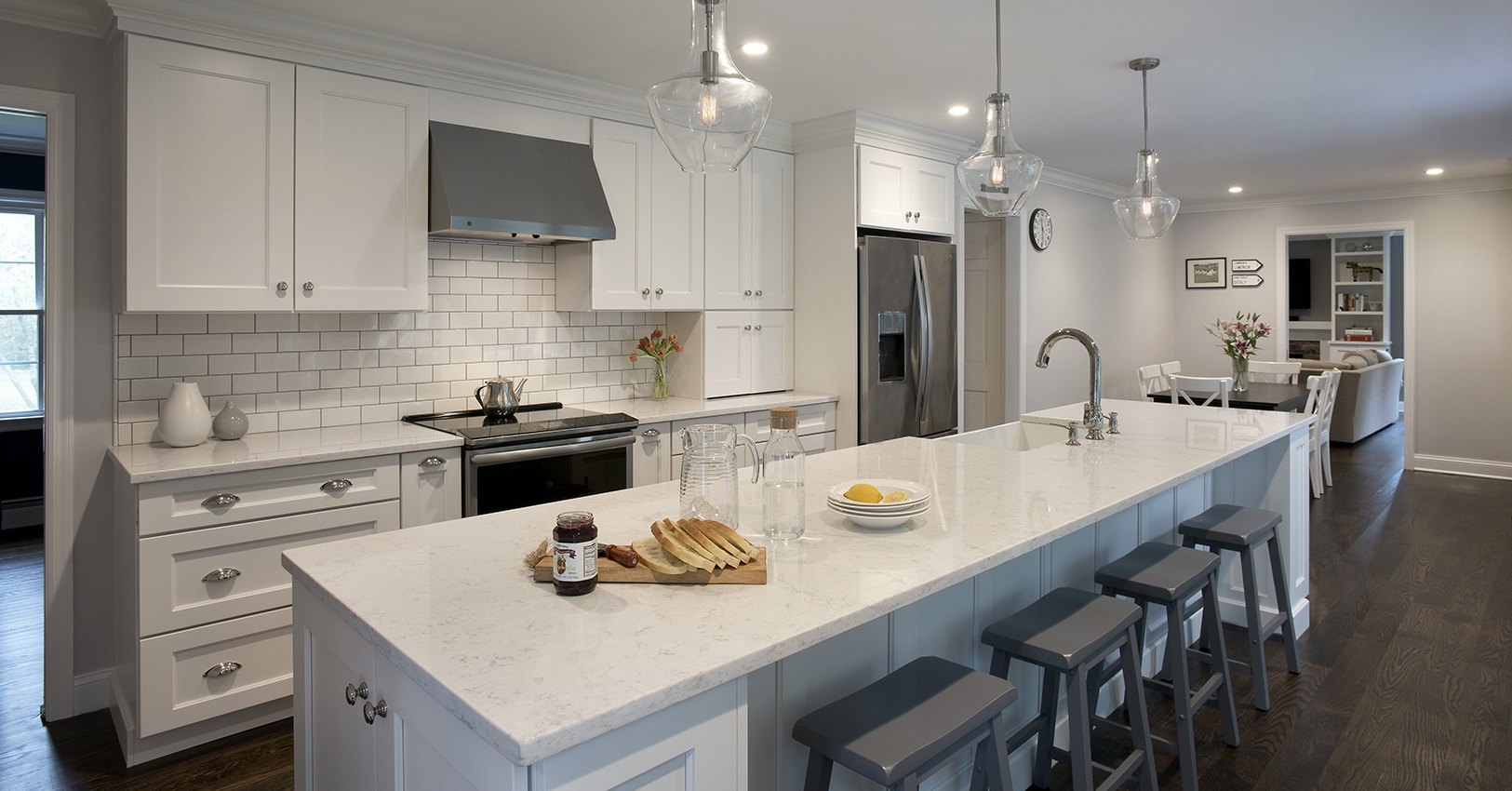 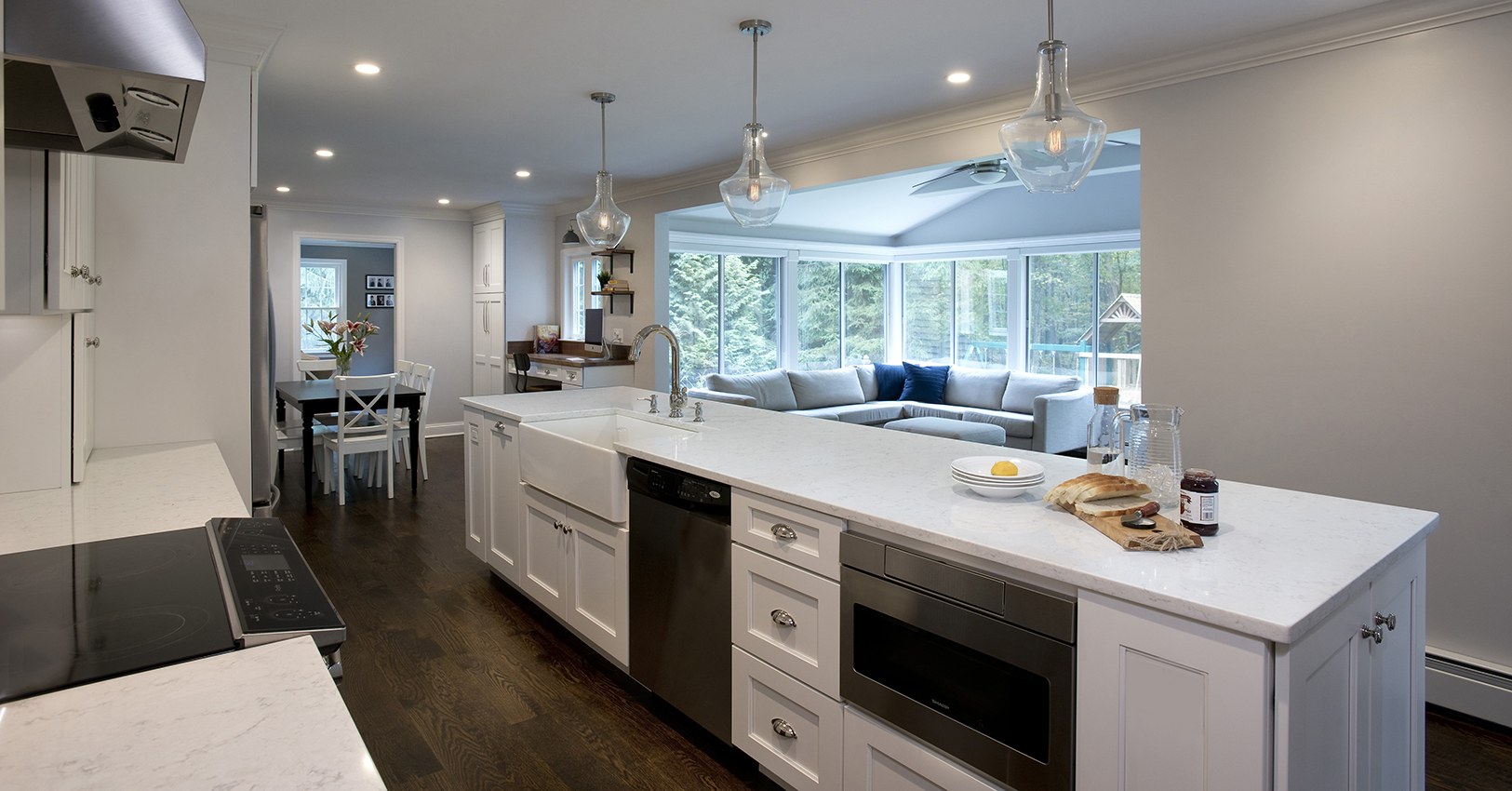 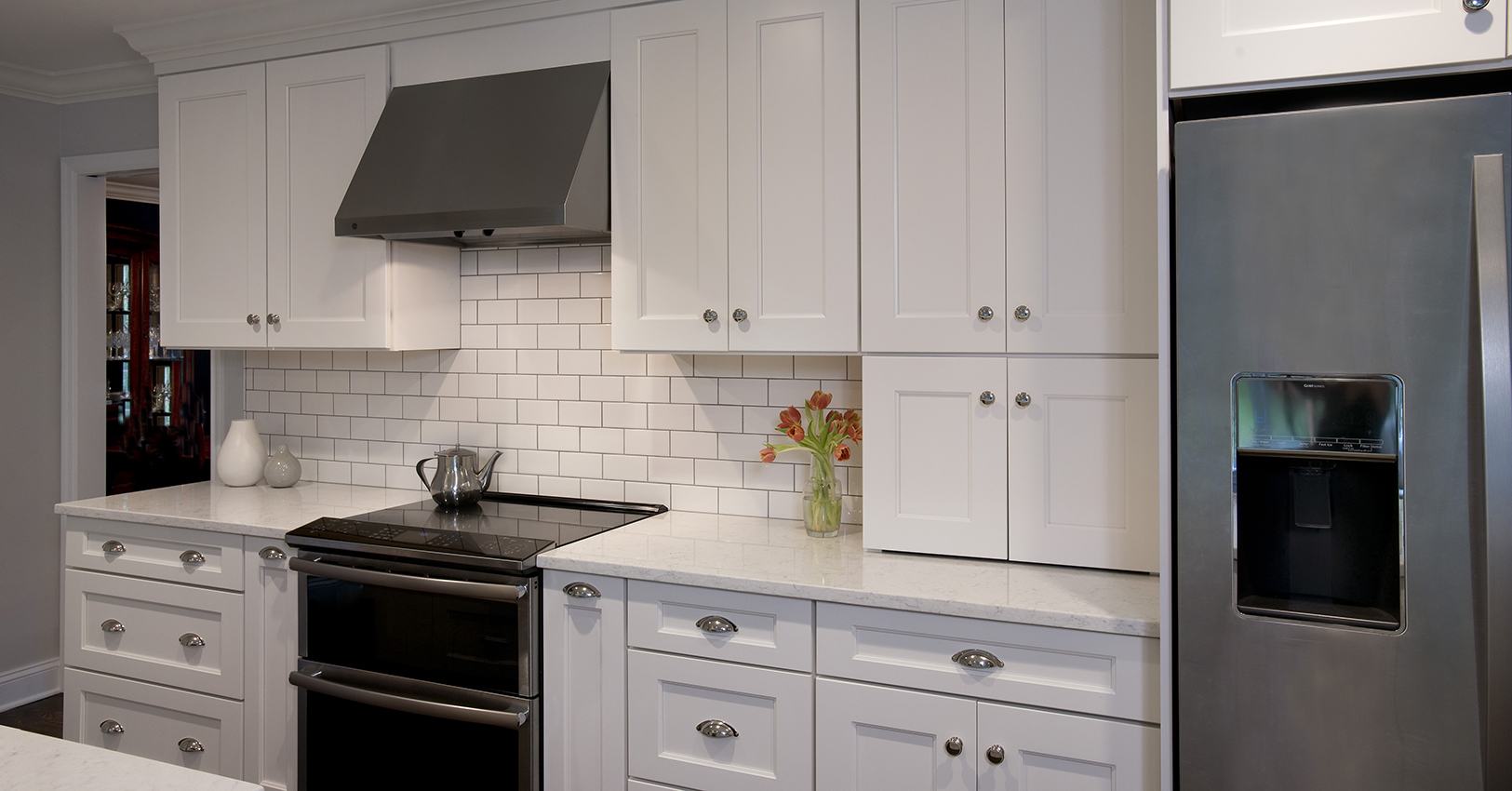 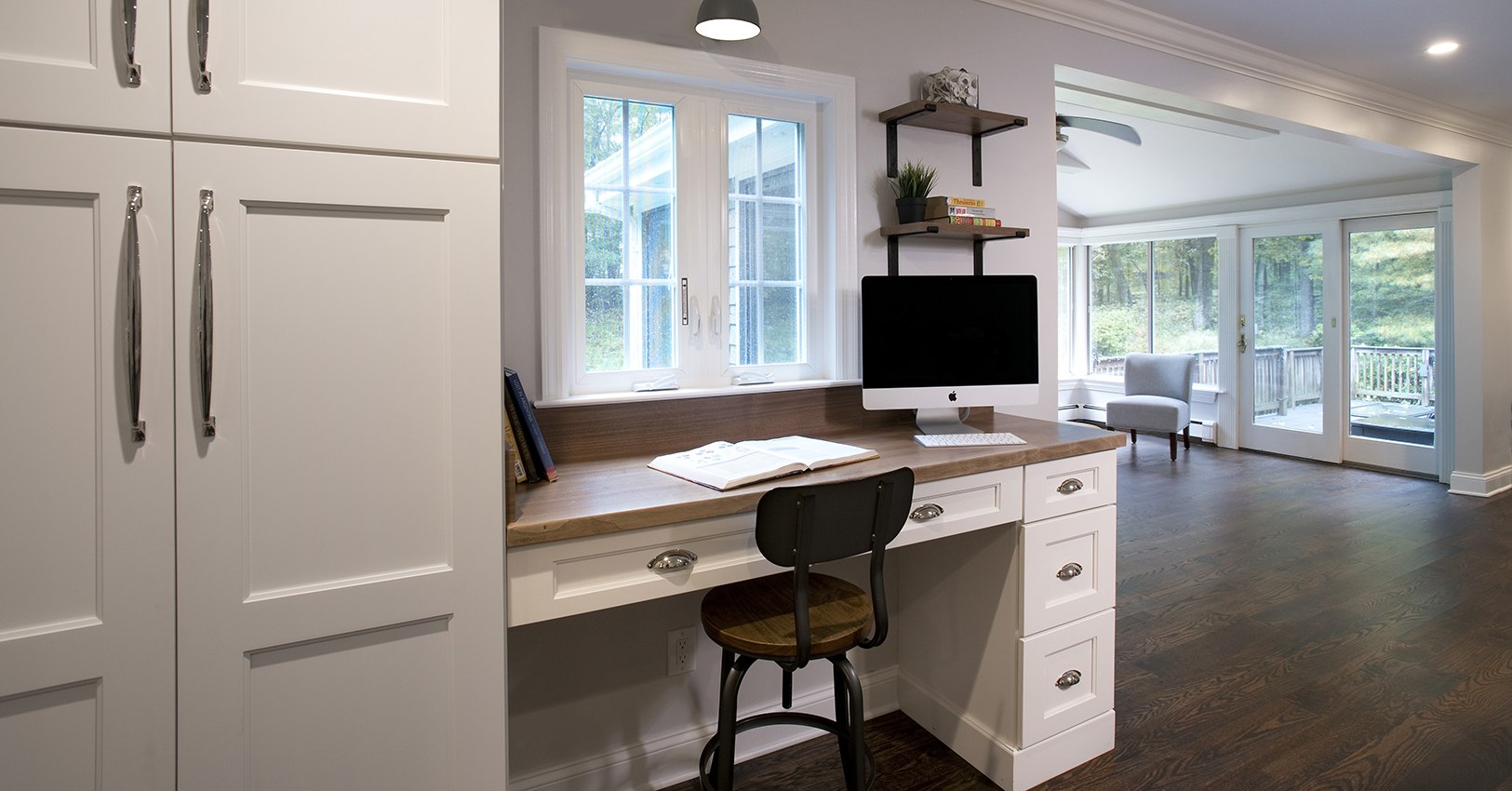 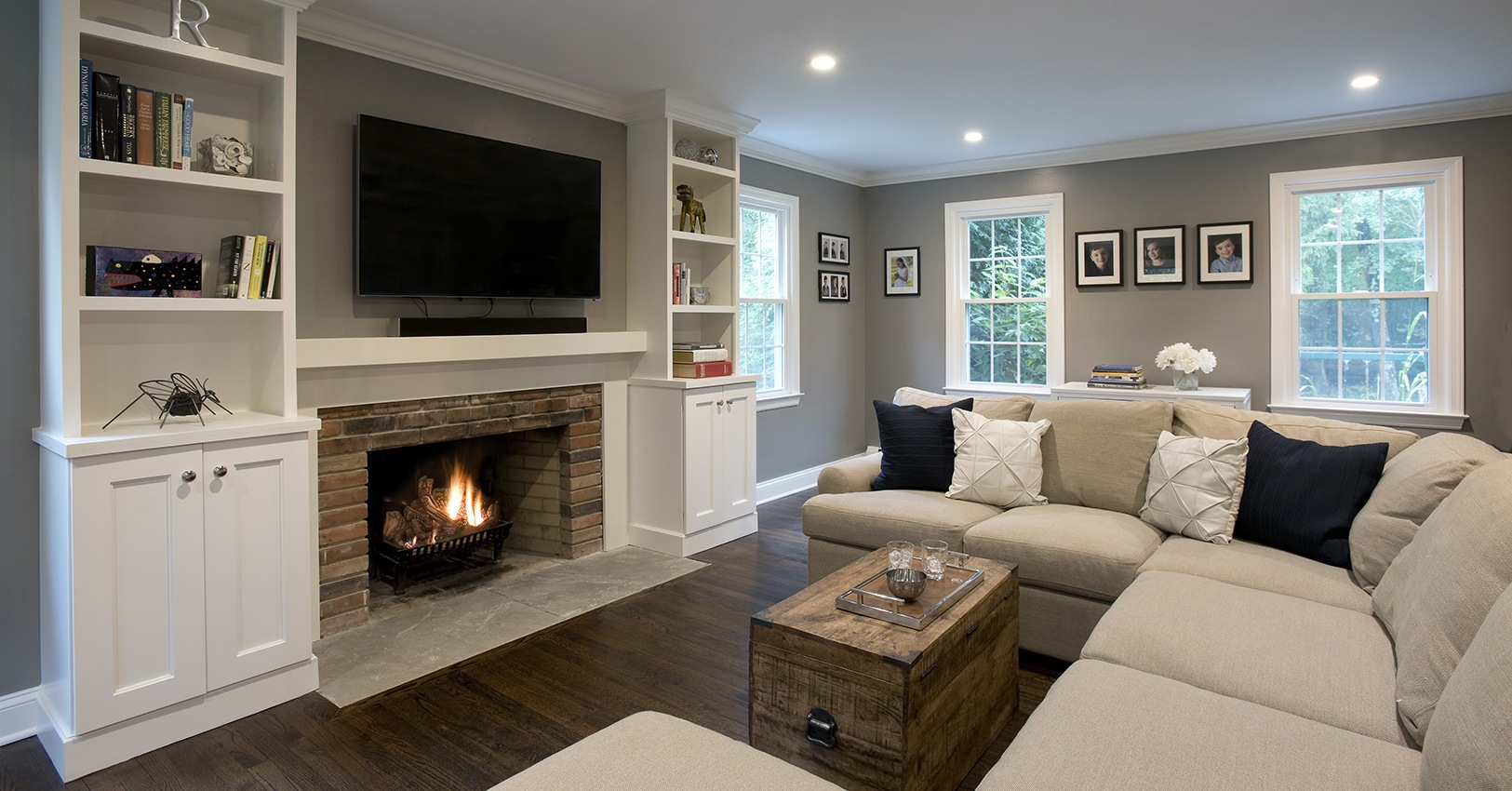 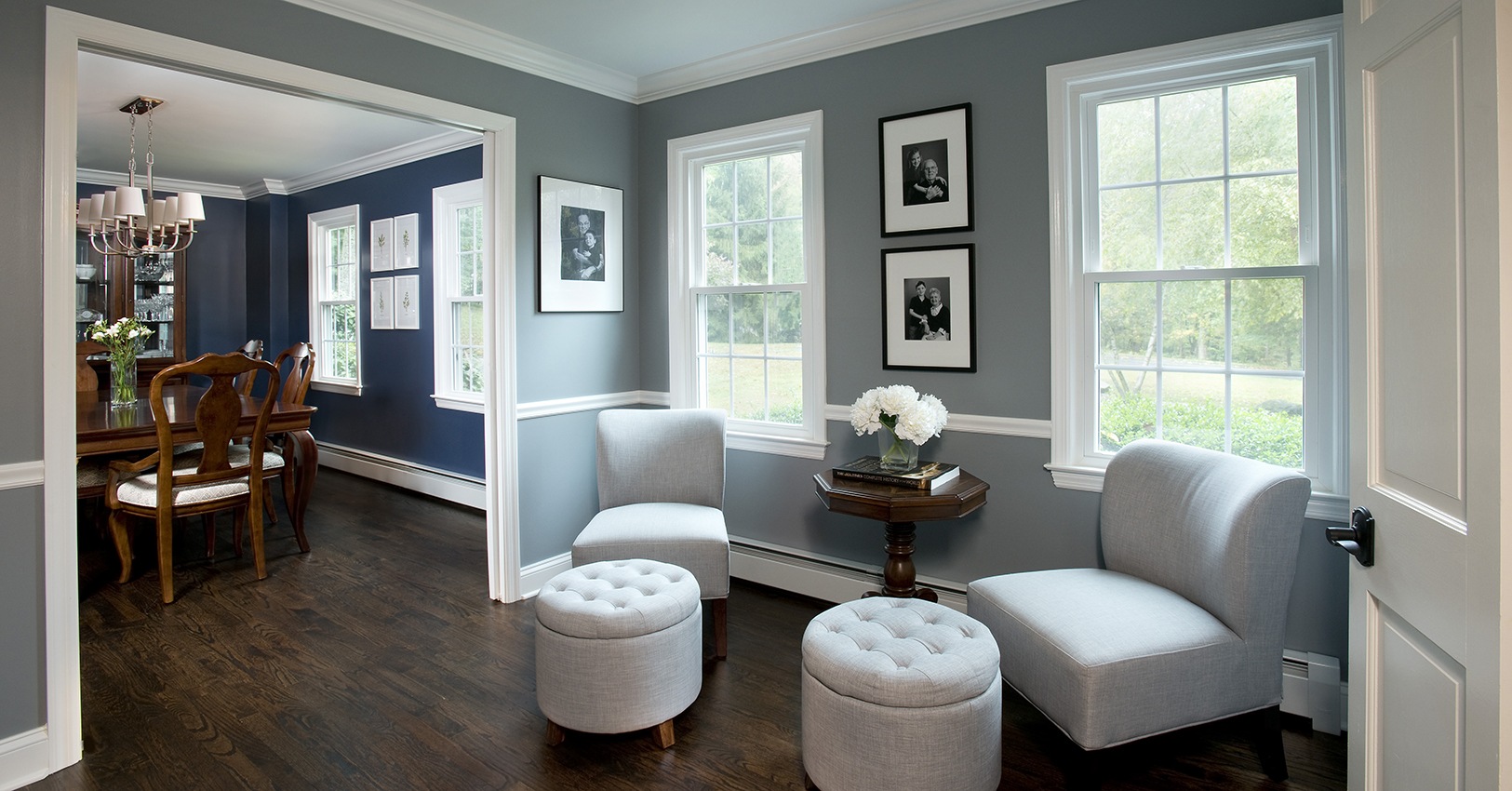 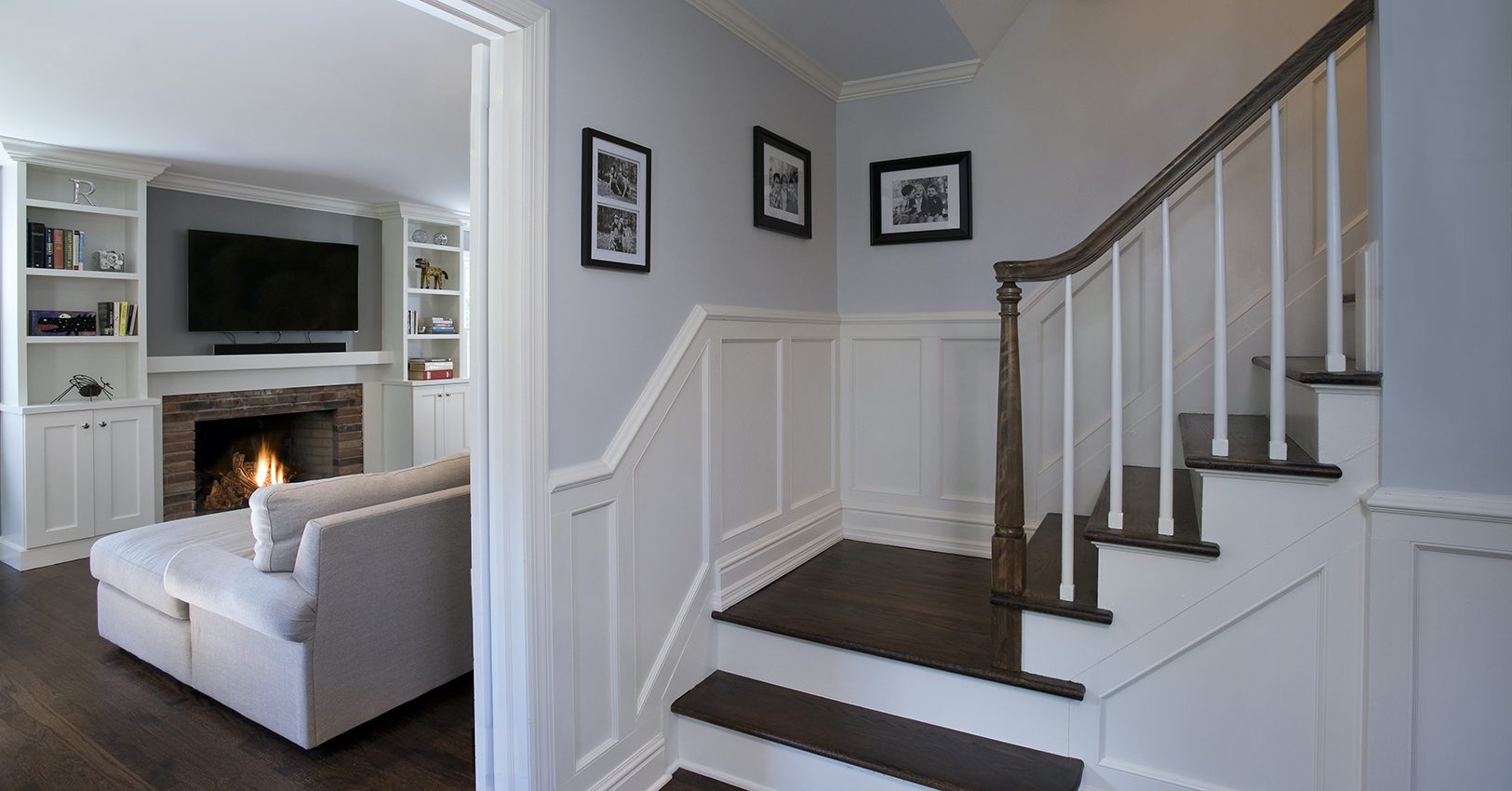 The front entry and foyer stayed where they were, and everything else changed!

The new layout works around the centrally located kitchen, with rooms flowing from one to another in a way that makes sense. 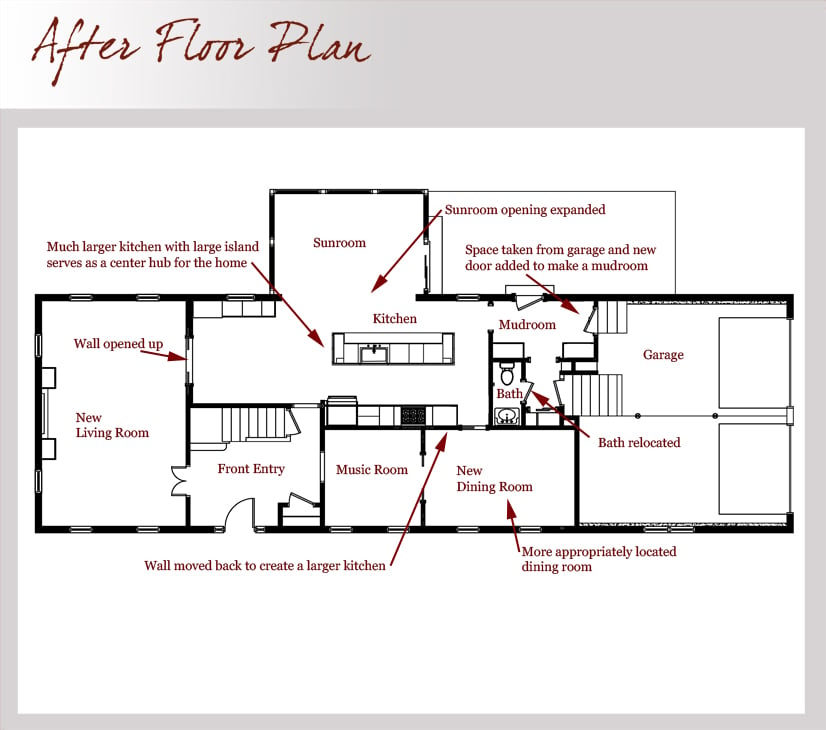 The first floor layout was disjointed and made it so the clients were unable to enjoy their home as much as they wanted to, especially with guests over.

It needed a total shake up.

The space that they had been using as a diningroom, accessible only off the front entry,  became the living room, and the wall between the kitchen and that space were opened up creating a circular flow.

The kitchen is now at the center of the house.

Moving the range wall closer to the front of the house made the kitchen deeper allowing for a  large island with seating for four. 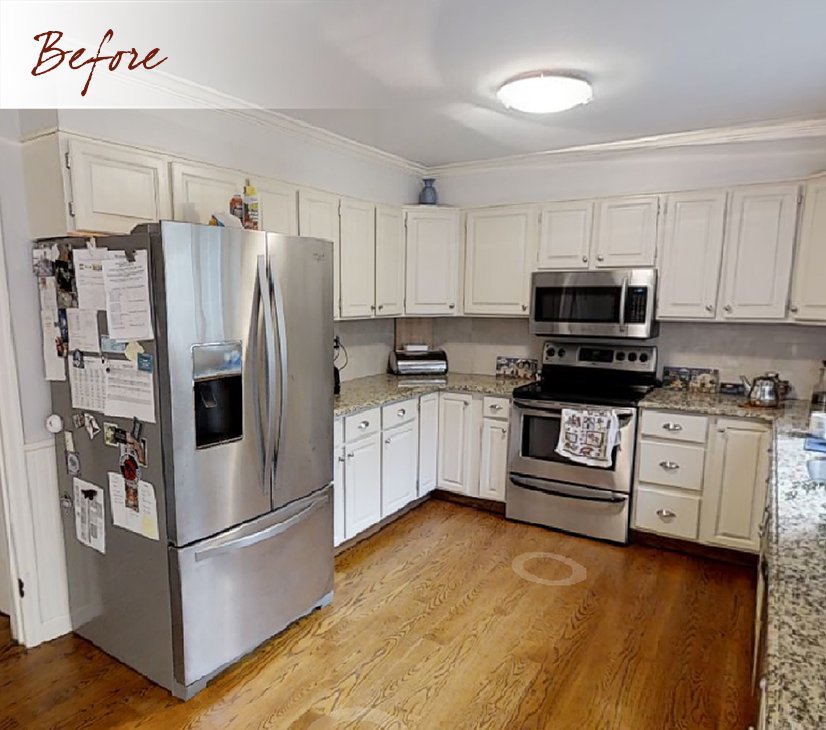 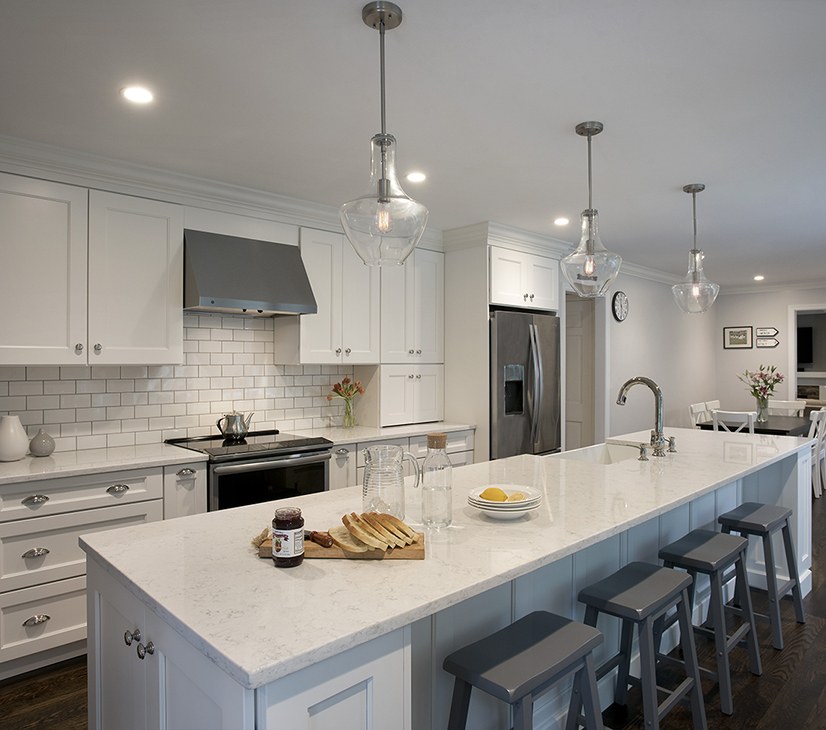 Having a bigger space for the kitchen made room for both a desk and a breakfast nook and just totally changes the feel of the central space.

Now it's spacious without feeling too open. 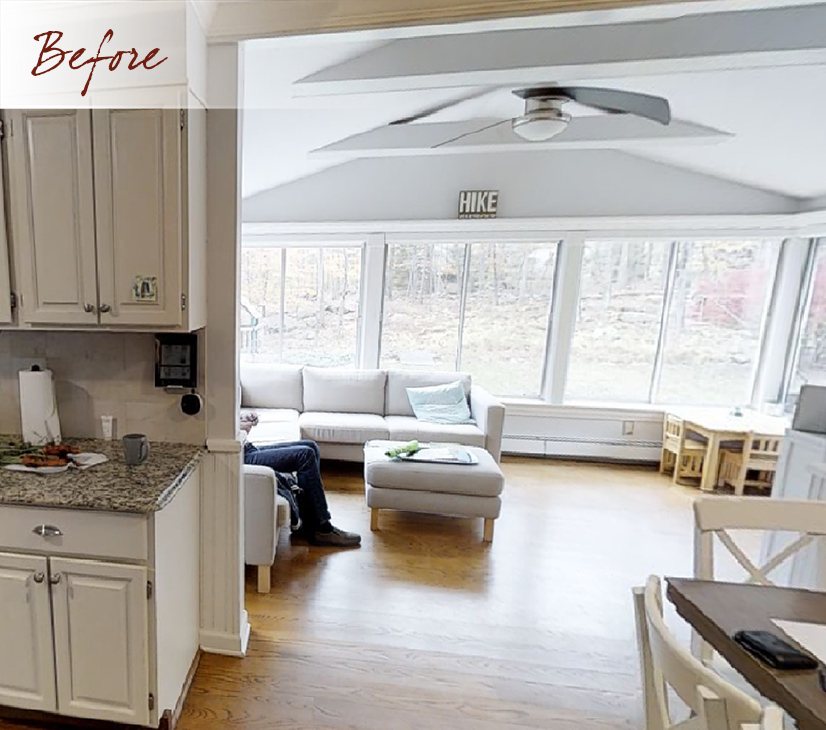 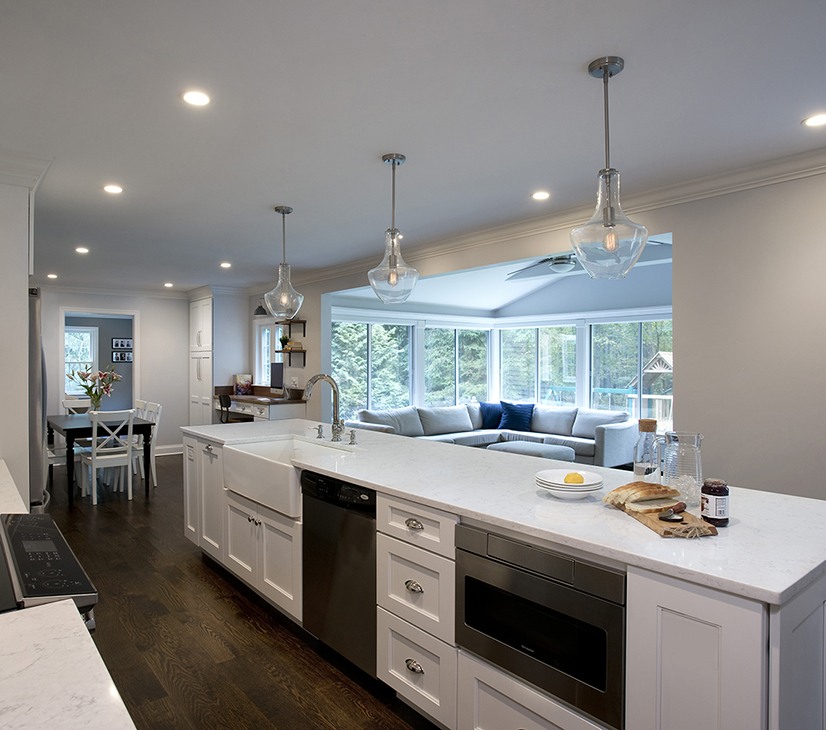 The sunroom opening was expanded, bringing more natural light into the kitchen.

To the left of the opening, a well lit desk with its own window, provides a cozy spot to do paperwork or surf the net. 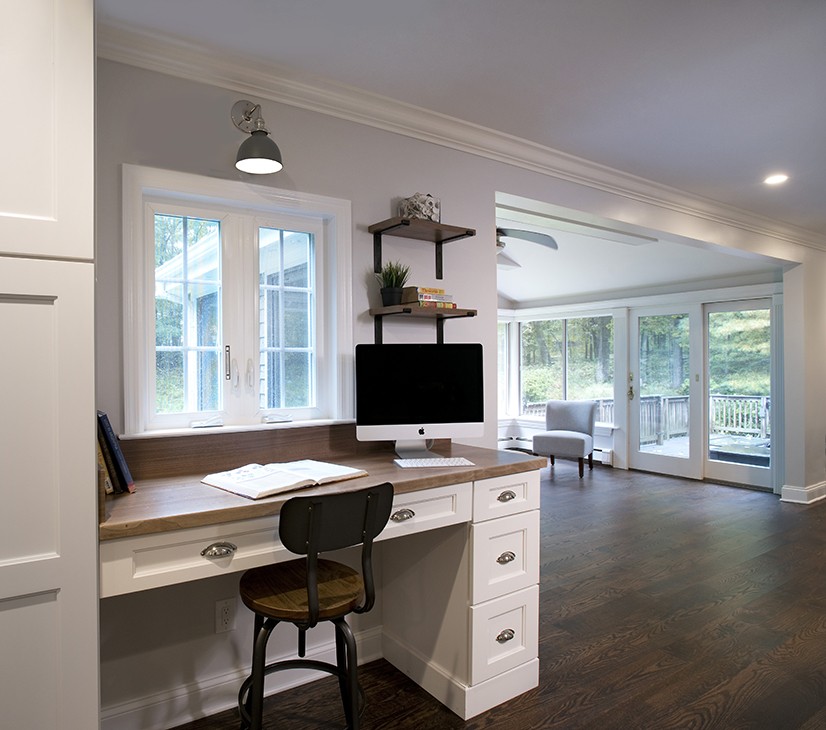 An appliance garage  tucked next to the fridge helps to keep the counters clutter free. 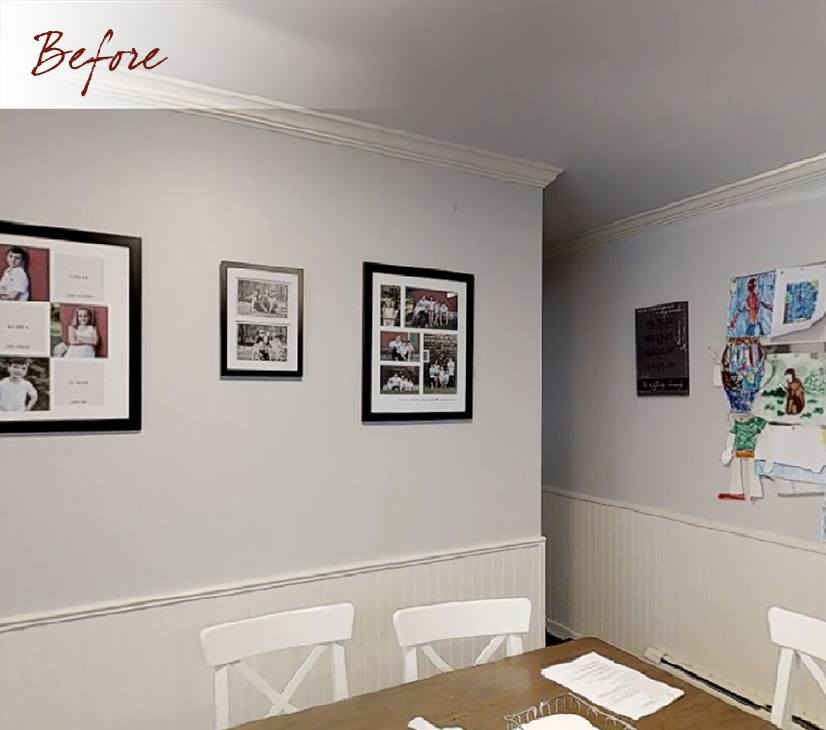 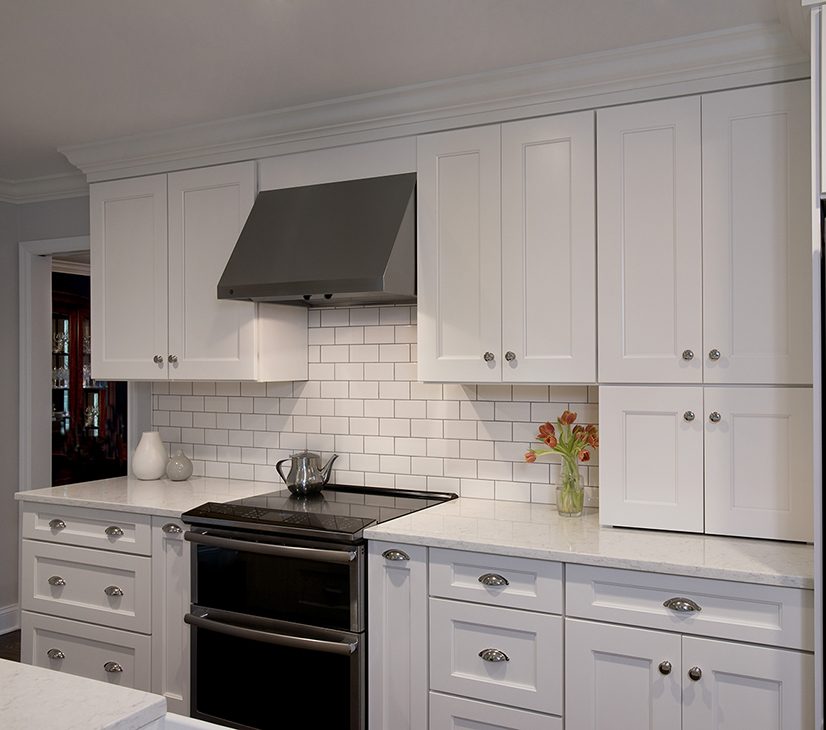 The new living room had been previously used as a dining room. This room was previously accessible only through the foyer.

The wall between the new kitchen and the new livingroom was opened up inviting you into it from either direction. 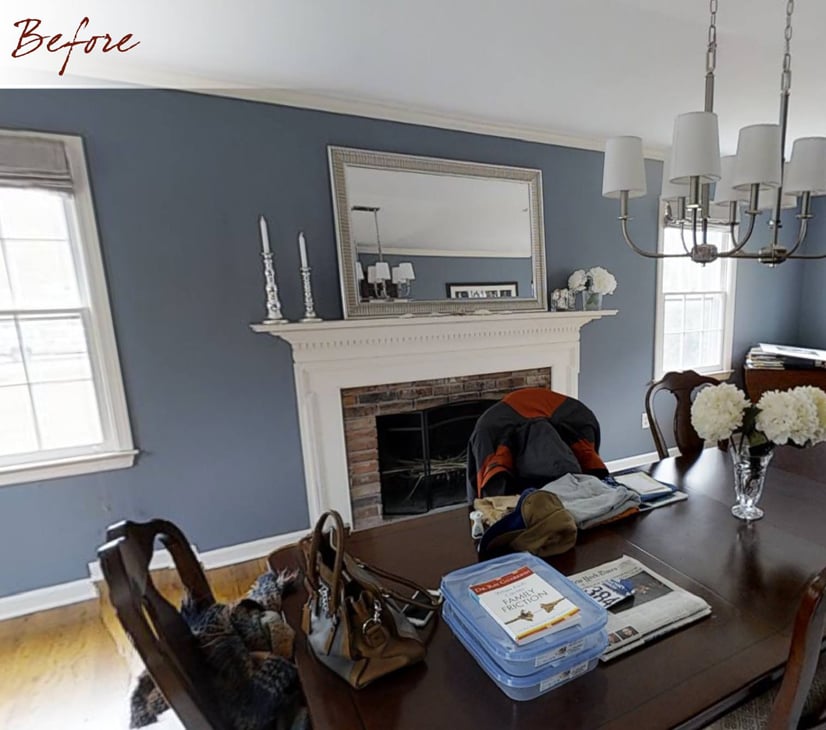 The dining room moved to the front of the house, off the kitchen.

Between the dining room and the foyer is a  music/reading room which can be closed off with sliding pocket doors to create a private out of the way spot for practicing or reading. 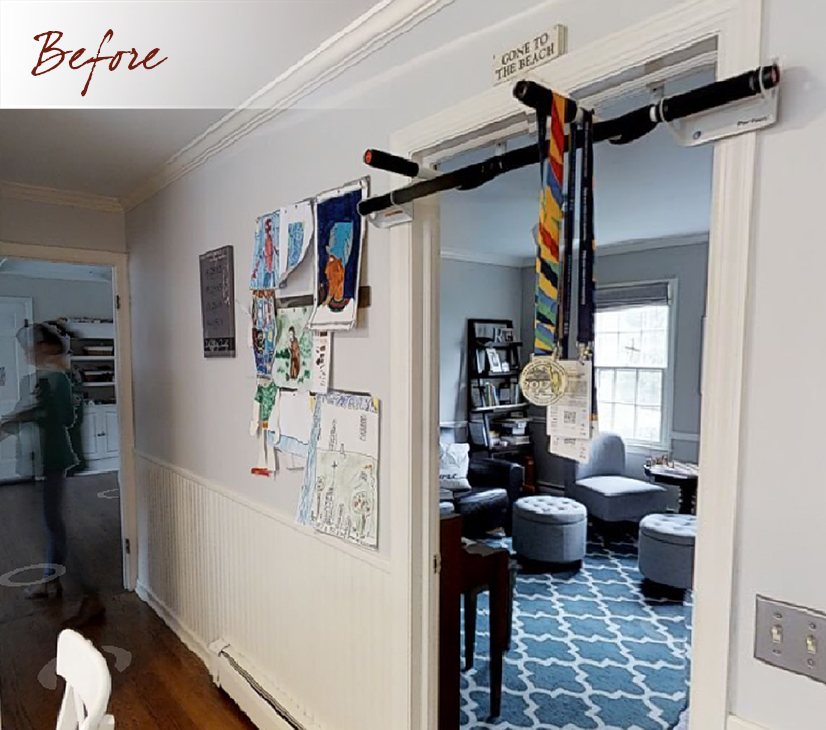 The mudroom is  a welcome addition to the home, and allows them to have a place for everything and everything in its place. 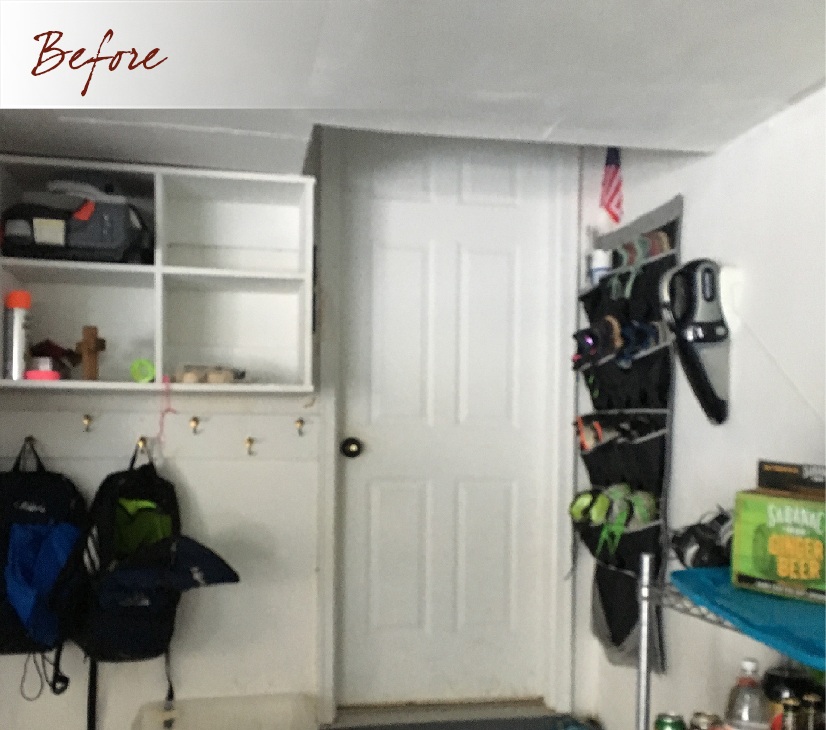 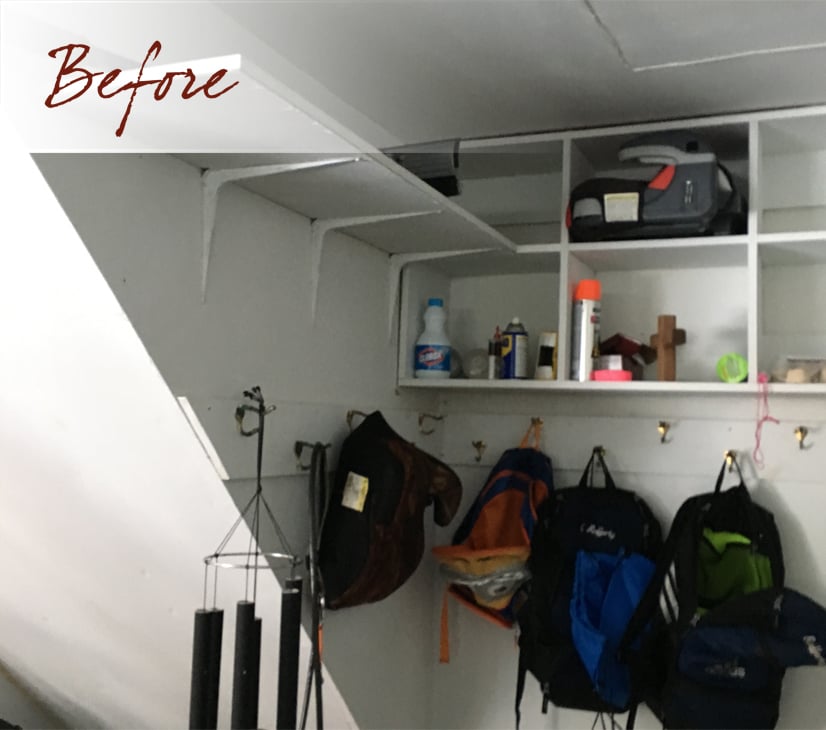 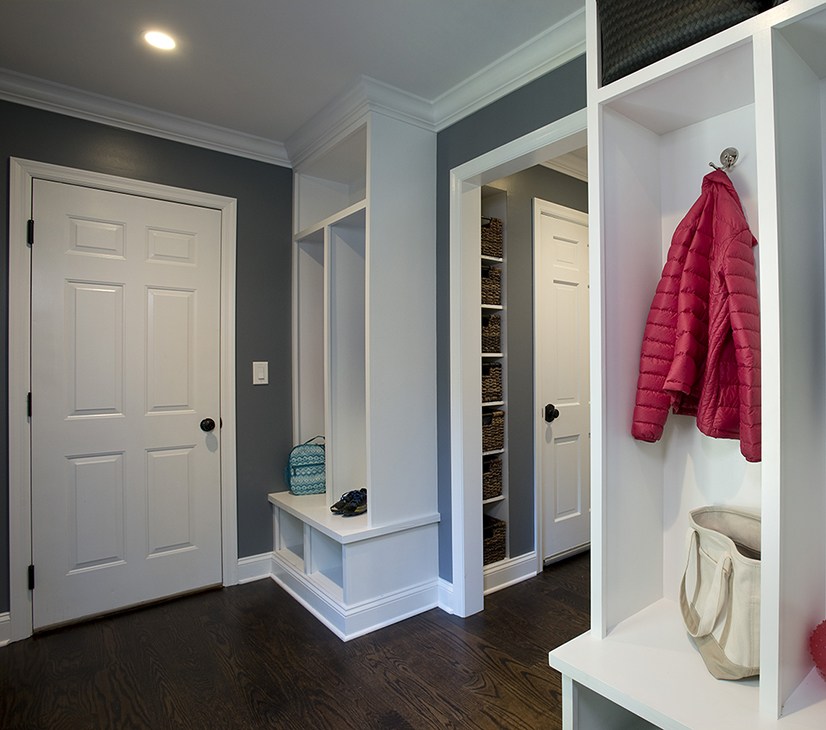 Tucked in just beyond the mudroom is a new powder room, with patterned concrete tile.  It provided a pop of texture, without going over the top. 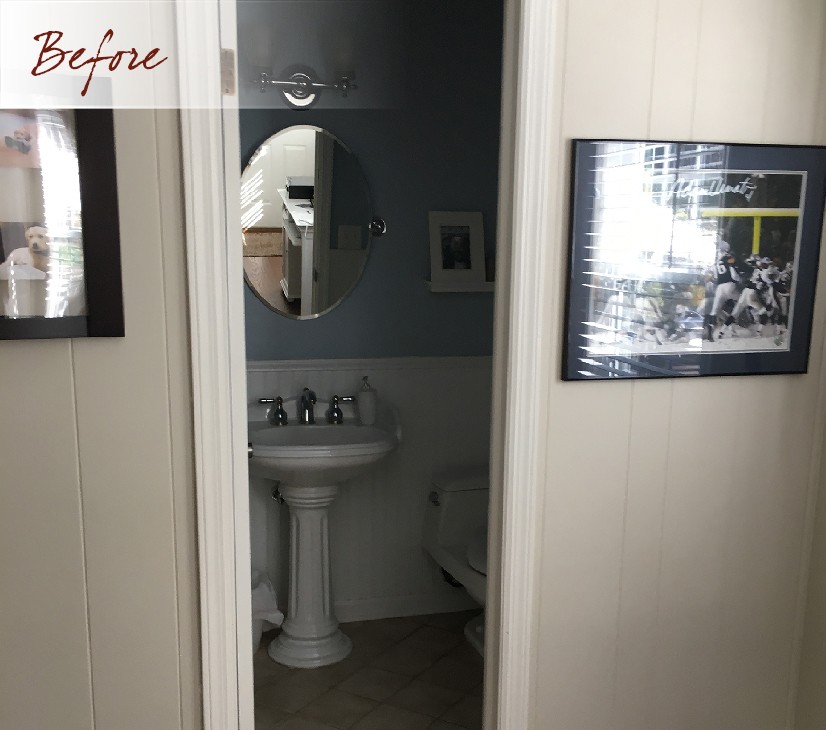 Classic New England Paint colors were chosen in a combination of coordinating colors, giving the home a warmed welcoming feel.

What a difference the changes to the layout make!

The desk features walnut counters and shelves, which contrasts well to the white cabinets.

The freestanding vanity has soft curves which complement the curvi-linear concrete patterned floor. 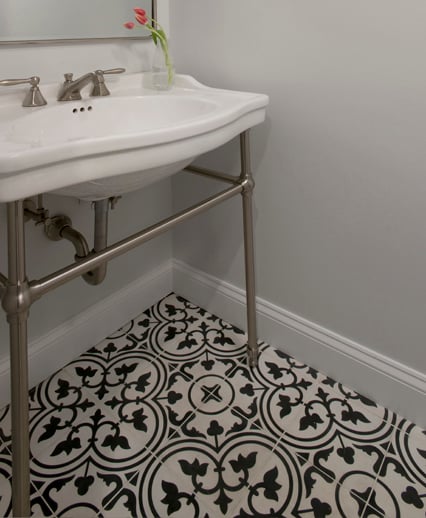 Team Something
Craftsmen
"We love it.  Kudos for getting the project done in time for my son’s Holy Communion.  It was an ambitious time line, especially since there were two or three days without power.  You really pushed to meet the deadline, and we had the final walk through on the Friday before his Holy Communion."
Renee R.
Wilton, CT

If your layout's not working for you, we're happy to explore the options  and make your home all you could wish it to be!